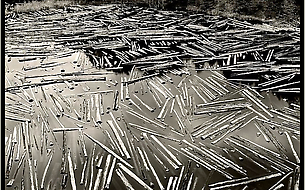 Robert Bourdeau trained and worked as an architectural technologist before an influential encounter with Aperture magazine and its editor, Minor White. A ten-year friendship with that elder statesman of photography encouraged Bourdeau to pursue the medium and embrace the emotional expressiveness on which White placed so much importance. Now in his eighties, Bourdeau is best known for landscape photographs in which the subject fills the entire frame, a compositional choice that emphasizes texture and occasionally creates odd spatial effects. Two pictures in this exhibition, his second at the gallery, exemplify this style. Yorkshire, England, 1985 is a straightforward depiction of scruffy northern fields, yet a low stone wall that divides the image horizontally adds a sense of strangeness. The wall masks a slope so that the land behind it appears as if a giant hand is pulling it upward, drawing it parallel to Bourdeau’s lens. Ontario, Canada, 1981 guilelessly portrays logs floating in a placid river. Yet the graphic contrast between the lightly colored bark and the water’s dark surface creates a pattern that Bourdeau must have known would recall Jasper Johns’s then-new crosshatch paintings.