Storm Breaking Over a Valley - Triptych, 2020

Edwynn Houk Gallery is pleased to announce a solo exhibition of new work by Sebastiaan Bremer (Dutch, b. 1970). Nocturne marks the debut of several series of portraiture that Bremer has been developing over the course of the past two years, culminating in the monumental triptych, Storm Breaking Over a Valley, 2020. Each unique image in the exhibition is characterized by Bremer’s meticulously hand painted white pointillist dots, however these three new series are distinct in the evolution of the techniques used, as he continues to push the bounds of his hybrid creative process.

In Veronica, Bremer furthers his investigation into personal memories, a common thread throughout his oeuvre, by reinterpreting a series of candid pictures of his mother Veronica, taken by his father when she was the same age as the artist. He engages with the silver gelatin prints by altering the surface through hand painting as well as incorporating elements of collage and layering, lending a sculptural quality to the prints. These images are a meditation on family history and relationships, but also function as a vehicle for self-reflection for Bremer, who sees himself in the expressions of his mother.

The series of five portraits inspired by the work of Rembrandt are a collection of exquisitely detailed character studies, hand painted onto black gloss paper. In a departure from his earlier work, Bremer has eliminated the underlying source material, revealing his technical mastery in delicately rendering the chiaroscuro faces that emerge from darkness, to create what he describes as “an impossible photograph.” Bremer is particularly drawn to the work of his fellow Dutchman because of the panoply of facial expressions Rembrandt was so brilliantly able to capture, and his ability to illustrate honestly, but with a subtle sense of humor, the wear and tear that human existence takes on each person’s face, regardless of gender, age, or social standing.

These portraits as well as the Veronica series can be interpreted as studies of the expression of human emotion, ranging in both mood and tension. Bremer’s exploration of the human condition reaches a crescendo with the triptych, Storm Breaking Over a Valley, an incredibly elaborate opus on the state of the world and the position of humankind throughout history, illustrated through an outpouring of humanity, eras, and souls emerging from the waterfalls and richly textured landscape. The deluge of swirling rapids rushing through the tableau is palpable, as it envelops the cast of figures taken from the pages of history. Bremer again employs stylistic references to the etchings of Rembrandt, as well as Leonardo da Vinci’s depictions of water, evoking the heightened sensibility of an Old Master painting. Painstakingly hand painted over a two-year period, the triptych is a symphony of visual information and a feat of obsessive dedication and curiosity. Invoking the sense of wit that he so admires in the work of Rembrandt, Bremer reminds us with this imagined scene that predicting the end of time is as old as history itself, and it is our hubris that allows us to believe that the times we live in are really it.

Sebastiaan Bremer studied at the Vrije Academie, The Hague and Skowhegan School of Art and Sculpture, Maine. The artist currently lives and works in Brooklyn, New York. His work has been the subject of three major catalogs: Monkey Brain (2003), Avila (2006), and To Joy (2015), and has been exhibited in such venues as the Tate Gallery, London; the Brooklyn Museum of Art, New York; The Gemeentemuseum, The Hague; and the Aldrich Museum, Connecticut. Bremer’s work is in the permanent collections of institutions including the Museum of Modern Art, New York, the Los Angeles County Museum of Art, Los Angeles, and the Victoria and Albert Museum, London. 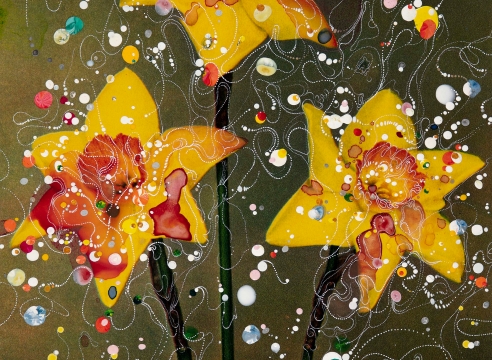