Most people know Sally Mann as one of the most influential and important photographers working today, but what is far less known is the fact that Sally Mann is also an avid and successful equestrian. On her farm in Lexington, Virginia, Mann fills her pastures with Arabians, a breed known for their spiritedness, loyalty, and for their unyielding courage, a combination of character traits which are essential for endurance riding, Mann’s chosen sport.

Sally Mann’s photography has focused primarily on her immediate surroundings and on those things closest to her; her husband, Larry Mann (the subject of Proud Flesh, 2005-2009), her three children: Emmett, Jessie and Virginia (the subjects of Immediate Family, 1984-1994, and What Remains, 2004); her farm (Mother Land, 1993-1996), the South itself (Deep South, 1998 and Last Measure, 2001-2002) as well as the ephemeral nature of life, inextricably linked to the concept of death, as it relates to all the above (What Remains, 2004).

But most recently, it was her relationship with horses, and with one horse-related event in particular, that gave birth to this newest series. On August 11, 2006, we received the following email from Sally Mann:

I had a real smash-up on Saturday...my stallion, cantering along way up in the mountains, suddenly staggered, reared back and fell over on me. I was knocked out but my friends say in his struggles to get up, he pummeled my back with his (newly shod that morning, *sigh*) hooves, bouncing me like a ragdoll...anyway, I came to consciousness in time to see him come crashing down next to me, dying. Terrible, indescribable.

Walked delirious 4 miles off the mountain and have been flat on my back for 6 days—Damaged everything, ribs, sternum, vertebrae, and black and blue from my eyes to my knees. The doctor who came out said, "You're going to hurt like crap for a long time" and so far he's been right. Sad about the horse, too. I was really crazy about him. Probably an aneurysm killed him.

Anyway, if ever I can get vertical and move my arms, beyond typing that is, I will try some printing...

Two grids of Sally Mann’s Self-Portraits were included in the 2010-2011 exhibition, “Sally Mann: The Flesh and The Spirit,” at the Virginia Museum of Fine Arts, Richmond. In the accompanying book, John B. Ravenal, the Sydney and Frances Lewis Family Curator of Modern and Contemporary Art, wrote about the Self-Portraits:…Mann complicates the logic of the flattened geometrical order with references to the antiquated, the irrational, and the horrendous. The repetitive display of degraded images calls to mind discards from a mid-nineteenth-century photo studio – plates flawed by the sitter’s movement or the medium’s unstable actions, of which they present a catalogue: pitting, scarring, scratching, streaking, graininess, blurriness, erosion, fading, haziness, delamination, over-exposure, and under-exposure.For the very first time, the works from the Omphalos series will be on display. In this series, the focus is on the artist’s torso. Akin to the faces, the process is the same, but the grids of Omphalos examine more abstract, sculptural forms. The plates themselves have been treated as such: chiseled, scratched and smoothed until flesh becomes stone. Clearly a departure from one of the earliest and most timeless motifs in art, Omphalos is a title not only referring to the torso, but also to the symbolic continuation of the themes explored in Mann’s previous work: fertility, family, and heredity, recorded in the human form and in the land.Sally Mann lives and works in Lexington, Virginia. A Guggenheim fellow, and a three-times recipient of the National Endowment for the Arts fellowship, Mann was named “America’s Best Photographer” by Time magazine in 2001. She has been the subject of two documentaries: Blood Ties (1994) and What Remains (2007), both of which were nominated for Academy Awards, She has been the subject of major exhibitions at the Institute of Contemporary Art, Philadelphia, and the Corcoran Gallery of Art, Washington, D.C.. Her photographs can be found in many public and private collections, including the Metropolitan Museum of Art; the Museum of Modern Art; and the Whitney Museum of American Art. Sally Mann is represented by Gagosian Gallery and Edwynn Houk Gallery. 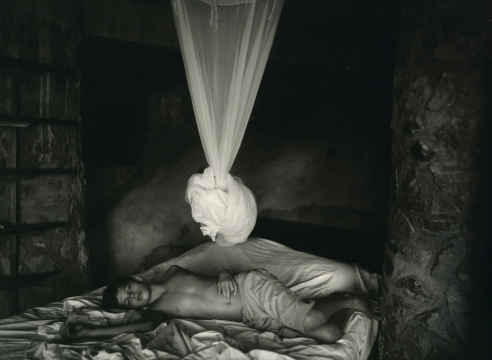 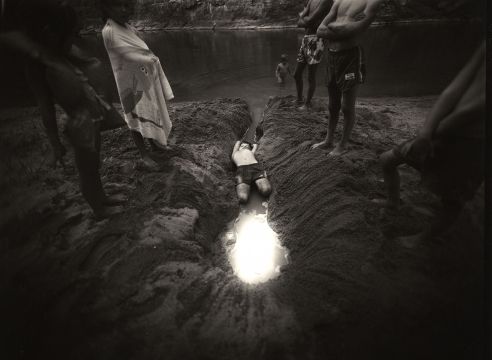 Review of 'Sally Mann: A Thousand Crossings' at The Getty
Sally Mann in the Los Angeles Times 2 January 2019

The show was jointly organized by the National Gallery of Art and the Peabody Essex Museum in Salem, Mass. It is weighted toward photographs made since 2000, which account for roughly two-thirds of 110 works, all but five black-and-white.

Mann first came to widespread attention in a less than auspicious way. In 1992, conservative culture warriors attacked the publication of her fourth book, “Immediate Family,” which includes 13 images (of 65) in which one or more of her three then-young kids is unclothed — a not uncommon occurrence at a cabin on isolated land during a humid summer day. A brilliant picture like “The Ditch” unravels the fearful hysteria that fueled the uproar. 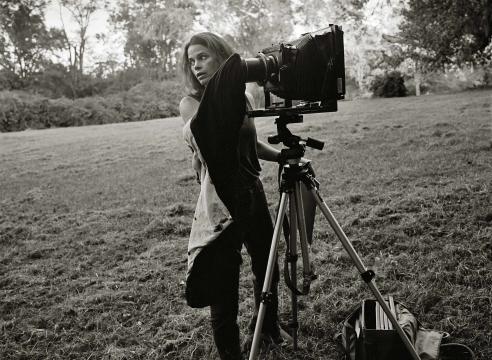 Like many students of art history, curator Sarah Kennel’s first introduction to Sally Mann came with Immediate Family. Published in 1992, Mann’s groundbreaking and controversial exploration of childhood stands as one of the great photography books of our time. 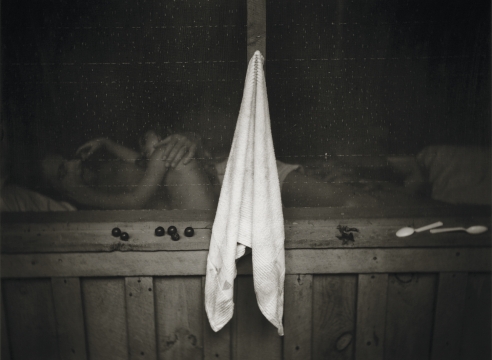 If there is one medium over which the photographer Sally Mann has total command, it is the written word. She is a superb writer, having learned well from her favorite authors and poets, Nabokov, Faulkner, Welty, Rushdie, Eliot, and Pound. Her particular gift is metaphor. Here, for instance, is Mann describing the drying blood on the frozen ground after a convicted sex offender who had escaped onto her farm was shot, killed, and hauled away: the blood puddle “shrank perceptibly, forming a brief meniscus before leveling off again, as if the earth had taken a delicate sip.” 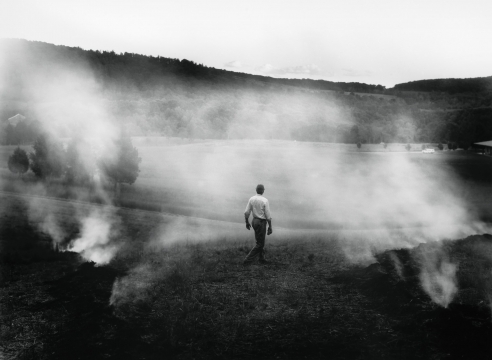 Sally Mann, born in a hospital that had once been Stonewall Jackson’s home, has lived in Virginia most of her life and always proclaimed her Southern-ness in her photographs and in her engaging and boisterous memoir, “Hold Still.” She says that what makes her work Southern is her obsession with place, family, the past, her love of Southern light, and her willingness to experiment with levels of romance beyond what most late-20th-century artists could tolerate. Add to that romanticism the influence of Southern writers and you get a tinge of gothic. A streak of expressionism also comes into the mix, powered by the will to express feelings strongly and the capacity to make those visible. 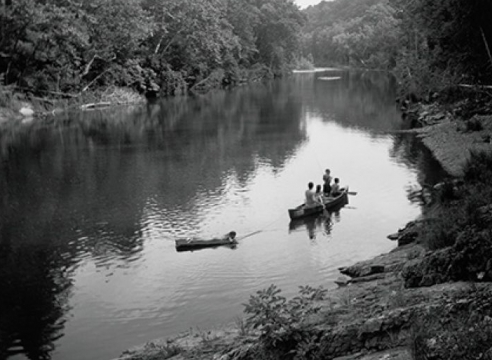 It’s December and  in Virginia, at Sally Mann’s countryside home, she has invited Bill T. Jones for a photo session. Death – its menacing approach or dark legacy – looms large in Mann’s work, and it’s no surprise to find the dancer-choreographer’s high cheekbones made skull-like behind her lens. “Almost a death mask,” she concludes in a video of the encounter shown in a major survey at the National Gallery of Art in Washington. Sitter and photographer, both 66, are keenly aware they have entered their final chapter. 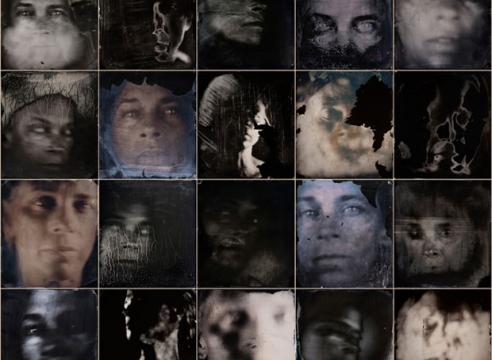 The award winning photographer did produce plenty of work during the following few week's convalescence, even though she couldn't move far from her own beside. Mann made her photographs on a large-format film camera, so lugging the equipment out of doors and into the countryside surrounding her house was out of the question.

Instead she decided to capture photographs of herself. The resultant images of her own face (Self-Portraits) and her own damaged torso (Omphalos) are curently on show at the Edwynn Houk Gallery in a show dubbed Sally Mann: Upon Reflection until 3 November 2012. These shadowy, beguiling images are glass-plate ambrotype positives straight from the camera, developed using a long-winded process almost as old as photography itself. This dated and intricate process causes imperfections in the printing with scratches on the surface and even parts peeling off. The resulting pictures are suitably bruised and battered, dark exposures with minimal contrast or focus, causing eyes and facial features to rise from the darkness. 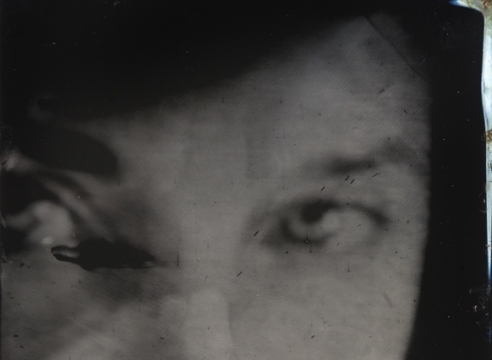 Sally Mann: Upon Reflection in The Eye of Photography
Exhibition review 25 September 2012

We’re already familiar with Sally Mann’s fascination with trauma, the fragility of life, and anything related to death. Since the beginning of her career, Mann has always turned her gaze toward others: her husband Larry, her children Emmett, Jessie and Virginia, and nameless bodies in various states of decomposition.

For Upon Reflection, her latest exhibition, Mann has taken herself as her subject. In 2006, Mann suffered an accident while horseback riding in the mountains and spent months recovering. She describes the incident as both psychologically and physically traumatic. Over the course of a year, she took more than 200 self-portraits—mainly of her face and torso—as a kind of art therapy. 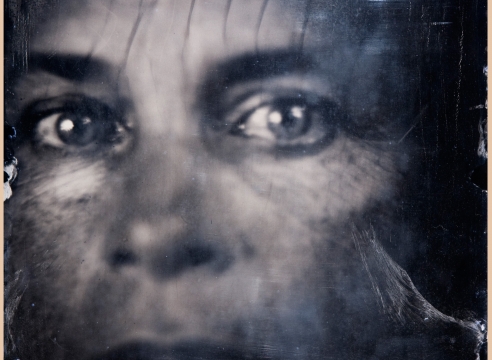 What is new here is that after a riding accident laid her up with serious injuries in 2006, she boldly turned the camera on herself, making countless head shot portraits and nude torsos. There are no smiling, happy faces in this parade, however; her expressions cover the territory from deadpan to grave, with a few stops for steely, weary, wise, zombie-eyed, and almost meditatively ecstatic in between. The tonalities shift from washed out grey to brown to bronze to shadowy black, and the chance movements of the chemicals create unexpected spectral drips, swirls, and highlights that often obscure the image. Some of the works have also been scratched and abraded, with the emulsion flaking and chipping off, exposing areas of crackly black glass. Seen together as grids and typologies, the faces become a taxonomy of subtle emotional states; a wisp of hair or the details of wrinkles make some of the pictures humanly specific, while others drift into silhouette or death mask, the personal features erased and blurred. Mann's torso images are generally more abstract, reducing her body to a sculptural mass of white with a shadowy hint of a belly button or a dark triangle. The classical forms seem smooth and weathered, like fertility symbols from antiquity, at once haunting and timeless. The variation in these images is more subtle, elemental curves repeated with minute changes in brightness and contrast. 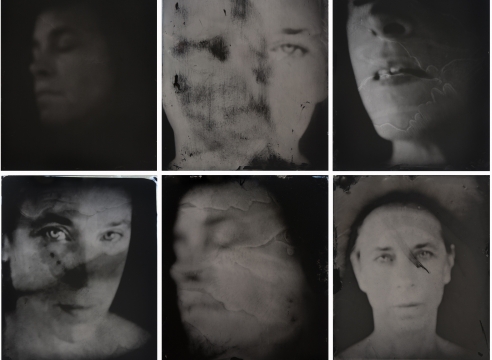 In the past, Sally Mann, named America’s best photographer (Time Magazine, 2001), has chosen young girls (At Twelve), her three children (Immediate Family), The South and Civil War Battlefields (Deep South and Last Measure), decaying human bodies (What Remains), and her husband (Proud Flesh) as her subjects. But in Upon Reflection, she has at long last turned her camera toward herself.  The results are eerie, beautiful, horrifying and brave. 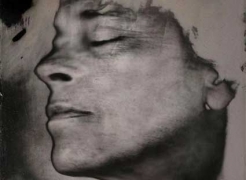 n the summer of 2006, Sally Mann severely injured most of her torso when thrown from the back of her horse. An email included in the press release from the Edwynn Houk Gallery recounts her experience of watching her beloved stallion die, ending with a promise to get some printing done “if ever [she could] get vertical and move [her] arms.” Given the severity of her injuries, this may have appeared to be wishful thinking at the time, but this promise would not go unfulfilled. 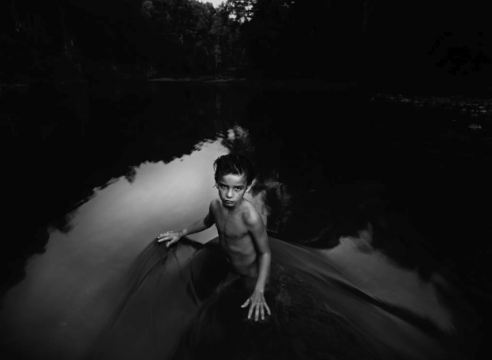 At the opening last spring of “Immediate Family,” Sally Mann’s show at the Houk Friedman Gallery in New York, the winsome young subjects of the photographs aroused as much curiosity as the artist herself. Motoring among the spectators like honorees at a testimonial dinner, Mann’s three children — Emmett, 12, Jessie, 10, and Virginia, 7 — looked completely at ease with the crowd’s prying adoration. While her mother and father conversed with friends and admirers, Jessie orbited the four rooms in her red dress, fielding questions from strangers eager to know more about her parents. Beneath a portrait of himself in the water, Emmett shrugged off the stares and expressed a typical teen-age frame of mind. “These shoes cost $70,” he boasted about his opening night footwear. All three seemed unconcerned by the fact that on the surrounding white walls they could be examined, up close, totally nude.